Bridges and Islands in Stencil Design

Our principles around designing stencils and the difference between stencils that use bridges and those that don't.

Written by Colin Mitchell
Updated over a week ago

Stencil design can be a confusing and tedious proposition.

It incorporates considerations of manufacturing capabilities and limitations, customer requirements, materials, size, and the specific art, logo, design, or image to be made into a stencil.

Fortunately, our design experts weigh these factors to create custom mylar stencils optimized for both aesthetics and longevity.

What is a stencil bridge?

A bridge is a part of a stencil's design that connects floating elements, called islands, to keep them attached to the rest of the stencil. Often referred to as connectors, connection points, lines, or gaps, bridges can be used to improve structural integrity of a stencil. Typically, bridges are required in the design of a stencil to accurately depict details in lettering, faces, or logos. Sometimes, bridges can be removed, adjusted, or placed in a concealed manner that allows them to be minimally visible.

Here’s an example how lettering can vary when bridges are used:

Size is another factor when adding bridges to a stencil design. Check out this stencil we made for Victoria’s Homemade Cake in South Florida:

As you can see, the original logo submission is different than the resulting stencil design. Let’s take a closer look.

The main ingredient (no pun intended) altering the logo’s features is the size. It’s only 1 x 1 inch, which is among the smallest of stencils that we can make. Therefore, detail and extensive bridging required to connect the insides of the letters are not included.

Here's what the size of a potential bridge for this stencil design would be: 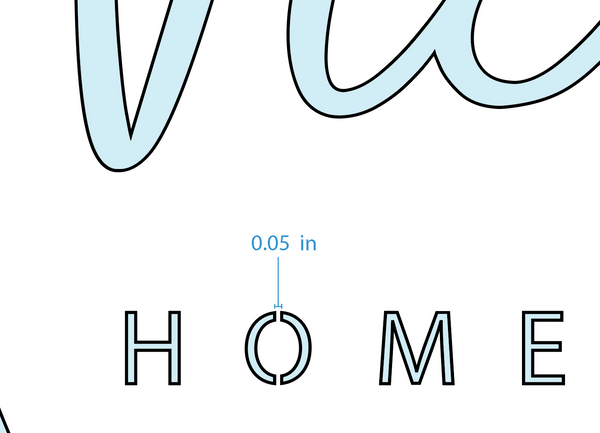 That’s a bridge size of .05 inches, or 5 hundredths of an inch. Typically, we only include details that tiny if they are specifically requested by a customer. Small areas like this can reduce a stencil’s durability because these areas aren’t as stable as a .25” bridge, or even a .1” bridge. One errant snag while moving the stencil could rip this detail and yield the stencil unusable. Therefore, for this particular logo design, all islands were simply blocked out in both the text and whisk in the upper part of the logo.

Concealing Bridges in a Stencil's Design

Let’s take a look at one more stencil design that demonstrates how Stencil Stop uses a logo’s existing elements to create unobtrusive bridge features. We recently made this stencil for decorating the top of lattes and other foamed coffee drinks for an event with Nike at the Dallas Cowboys Headquarters.

Note where the bridges are in the Cowboys star logo. They’re not cutting off the middle of the outer border of the star, like this one does. Instead, the bridges are flowing with the visuals of the design and are tucked into spaces where they appear to fit.

If you're still confused, no worries - we’re here to help! Holler at us if you want to know how we’d approach designing your specific logo or image, or if you have any questions.

Did this answer your question?